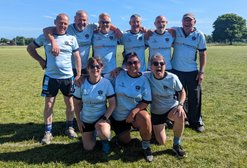 In their second competitive outing, Fordingbridge Walking Rugby team were looking to surpass their runner's up performance at Salisbury.

A gloriously sunny day, but thankfully a stiff breeze blowing across Gosport & Fareham's pitches, kept the temperature down a tad, for nearly 2 hours of Walking Rugby.

Next up were the hosts' A team, who are always a committed outfit, and posted Fordingbridge's first loss of the day, 1-3

The penultimate match saw the two teams vying for top spot, pitched against each other. A really close one with Fordingbridge thwarted by the full time hooter going down 1-2 to Esher.

In their last match Fordingbridge needed at least 4 tries to take a bonus point and be in contention for the cup... A 4-1 win over Amesbury saw them through, after some number crunching at the control tent.

Special thanks to Bob Carr who was the nominated ref, so played and officiated continuously throughout.